It’s the length of a soccer field and the weight of 320 large elephants, but the world’s biggest oil-refining tower has finally reached its destination — Nigeria — after an 11,000 mile voyage.

The distillation column, which will heat up crude at different temperatures to make various fuels, arrived on Sunday at a port in Lagos, Dangote Industries Ltd. said in a statement. It will now be carefully unloaded so that it can be installed as the critical piece of kit at the Dangote oil refinery in Nigeria. When operational, it will be by far Africa’s single biggest oil-processing facility and be one of the largest anywhere in the world.

The column is 112.5 meters (369 feet) long and weighs 2,250 metric tons. The tower — the largest of its kind in the world, according to Dangote — left China roughly 12 weeks ago aboard the Fan Zhou 9, a ship dedicated to transporting heavy pieces of infrastructure across oceans.

The refinery is a relatively unusual because it has just one column for distilling crude into more valuable fuels. Modern plants of a similar size would typically have at least two.

The distiller was moved Tuesday to its final destination about six miles away by a self-propelled modular transporter that’s designed for such activity.

While the arrival of the column is a milestone for Dangote, there’s still work to do to get the refinery ready, said David Bleasdale, an executive director at CITAC, an adviser to downstream energy companies in Africa. A major construction challenge remains completing the groundwork for the facility, he said.

Designed to maximize gasoline output, it could start operations at the beginning of 2021, with full capacity reached by the end of the first half of the year, Devakumar Edwin, a group executive director at Dangote Industries, said in an interview in October. 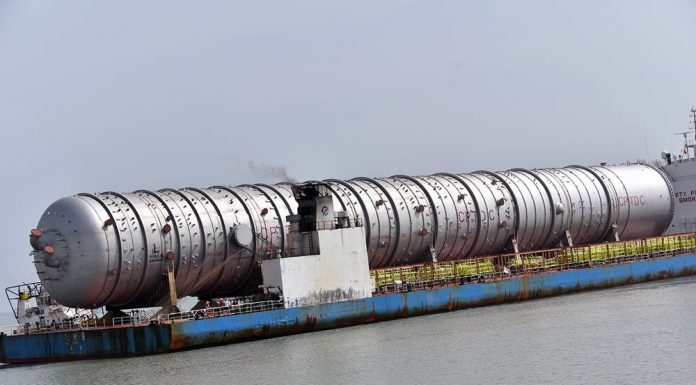 FG Tries To Blunt Atiku’s Momentum From US Trip; Alleges He Has Questions To Answer On Collapse Of Bank PHB