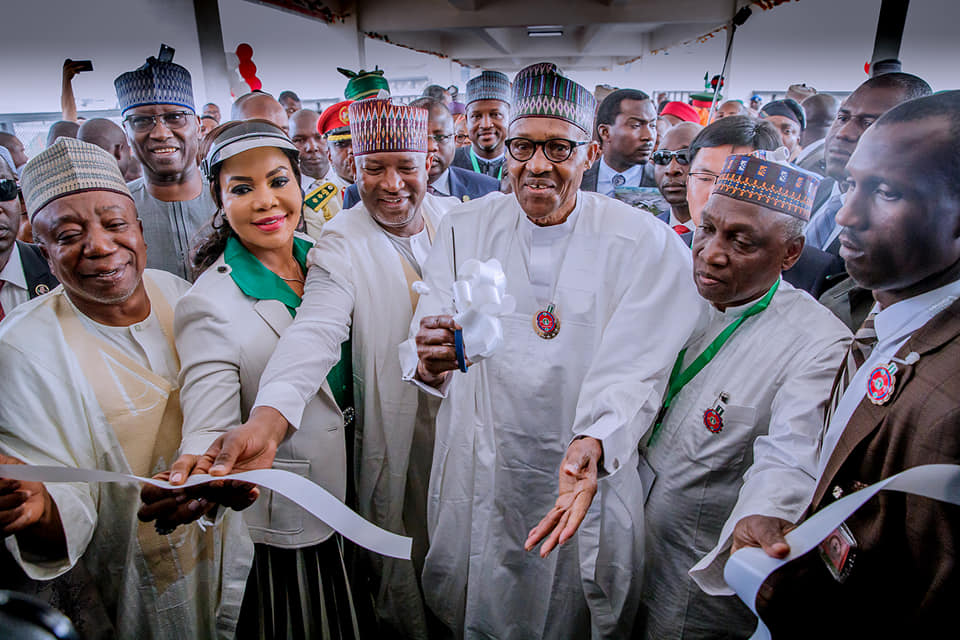 The terminal is said to be currently the largest in West Africa with a capacity to process at least 15 million passengers annually.

The terminal with a price-tag of $600 million [$500 million loan facility from China EXIM Bank with a $100 million counterpart funding from the Nigerian government] is one of five new airport projects awarded across Nigeria by the last administration of former president Goodluck Jonathan.

The Port-harcourt international terminal was similarly commissioned on 25 October 2018 by the president.

While commissioning the facility, the President said the federal government was committed to making Nigeria an aviation hub, and cited the completion of the airport as an indication of his government’s commitment to infrastructural development in the country.

But the PDP Presidential Campaign Organization PPCO berated the President for refusing to give credit to the PDP government of ex-President Goodluck Jonathan who conceived and commenced the airport projects across the country in 2013.

The council in a statement signed by its Director, Media and Publicity, Kola Ologbondiyan said it was unfortunate that President Buhari, “in his desperation to nudge up his globally established non-performance rating, ahead of the 2019 Presidential election,” engaged in yet another failed media stunt by trying to posture and claim credit for a project his administration made no contribution towards the funding and execution.

Continuing the statement said, “It was derisory to see Mr. President and his handlers, comically swaggering and gleefully hugging the cameras at the commissioning of a project they made no contribution.

“If anything, like the Port Harcourt Airport terminal building, President Buhari, in his flops, only succeeded in delaying the completion of the project, which concept and construction was perfected by the PDP, including payments to the contractors.

“Is it not appalling that President Buhari, who, out of sheer incompetence and total disregard for the development need of our nation, cannot point to any key development project he had initiated and executed since his inauguration in 2015, despite the huge resources at his disposal, only to be going around the country, claiming credit for projects executed by the PDP?

“In any case, what would one expect from a President that has openly admitted that he lacked the capacity to manage an economy as complex as Nigeria’s for which he has promised Nigerians more suffering in the coming year.

“The PDP is aware that President Buhari is desperate to validate his false performance indices, but seeking to lay claim to projects executed by our party, only shows that he has hit the end of the road.”