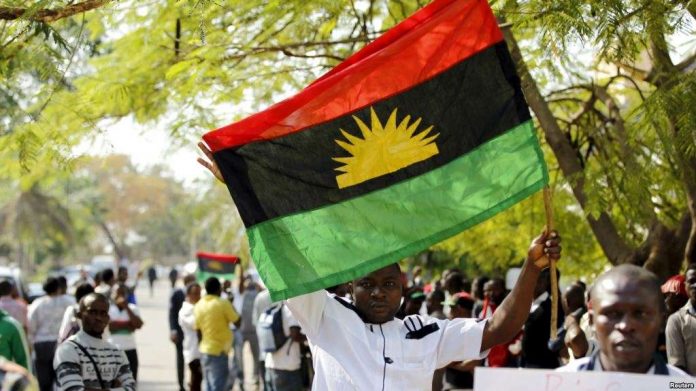 Two policemen and four others believed to be members of the proscribed Indigenous People of Biafra on Friday died during the group’s protest in Nnewi, Anambra State.

But the Anambra State Police Command said only one policeman died in the protest while a Divisional Police Officer in the area was hospitalised after sustaining injuries in the clash that erupted when security agencies stormed the venue of the protest.

Speaking with our correspondent on the telephone, the Deputy Commissioner of Police in charge of operations, Mike Okoli, said, “I will confirm to you that we lost a policeman, an inspector in the clash. The DPO who went with him to that operation is hospitalised. I can’t tell you of any other casualties; this is the much I know. It was gathered that the pro-Biafran agitators marched round Nnewi and environs on Friday sensitising the people about the need for a referendum to highlight the need for the Sovereign State of Biafra and the rejection of the 2019 general elections.

Members of the group numbering about 2000 had stormed the Nnewi market, shouting “No referendum, no 2019 election.”

Waving the Biafran flag as they moved round, the protesters asked people in the market not to participate in the 2019 general elections unless the Federal Government heeded their demand for the conduct of referendum to actualise Biafra Republic. Our correspondent gathered that trouble started when security operatives arrived at the scene in three Toyota Hilux pick-up vans and attempted to stop the protesters.

Members of the group were said to have pounced on the policemen and destroyed their vans, with two people dead in the process. The development forced traders in the Nkwo Nnewi market to close their shops and scampering for safety.

The IPOB’s Media and Publicity Secretary, Emma Powerful, in a statement made available to our correspondent in Awka, said members of the group went on a peaceful demonstration to express their joy over the “second coming and appearance” of the IPOB leader, Nnamdi Kanu, in Israel.

Powerful said the reappearance of their leader was a testimony that the struggle for Biafra was divine.

The statement partly read, “Our leader’s reappearance in Israel after the Nigerian government and her security forces, including the Nigerian Army, Air force and Naval forces invaded his compound at Afaraukwu Ibeku in Umuahia, Abia State, last year September is clearly an indication to all and sundry that God Almighty is behind the struggle for Biafra liberation.

“Biafrans are equally today showcasing to the world that we are ready to boycott every Nigerian elections come 2019 especially the presidential election next year. “Our march today on the roads and streets across Biafraland must send signals to politicians and saboteurs among us that Biafrans are determined to leave the prison called Nigeria where British government experimented to lead black Africans and other black nations across the globe but failed to live up to the expectations for over 100 years because of the Hausa-Fulani caliphate dominations.

“IPOB rally and march today (Friday) being November 23, 2018 is ongoing in all the states across Biafraland like Rivers, Enugu, Abia, Anambra, Delta, Imo, Ebonyi, Cross Rivers, Akwa Ibom and Bayelsa states and other Biafra clans and tribes fraudulently carved into Kogi, Benue and Edo States.”

He said the group would not rest until a date was given for Biafra referendum to hold so that its people would decide whether to stay in Nigeria or not.

He added, “IPOB is divinely ordained to retrieve Biafra sovereignty from this enclave called Nigeria. We are coming to show Nigerians and its handlers including their security apparatus what is called civil disobedience because IPOB is more of intellectuals.”