Nigeria’s economy still fundamentally weak managed a sluggish growth rate of 1.81% in the third quarter of 2018, according to the National Bureau of Statistics (NBS) report just released Monday 10 December.

The growth rate marked a marginal improvement of 0.31% per cent on the 1.50% growth recorded in the second quarter. But on Year-on-Year basis, (comparing with the same third quarter period of last year), the GDP expanded by 0.64% from 1.17% to 1.81%.

The Bureau in the report posted on their website said the value of the country’s economic output during this year’s third quarter period was 33.36trillion, higher than the third quarter of 2017 GDP which output was 29.37trillion, representing a 4trllion increase.

The report reads in part, “The nation’s Gross Domestic Product grew by 1.81% year-on-year in real terms in the third quarter of 2018.

The report stated that the non-oil sector boosted economic output for the period as the sector grew by 2.32% in real terms. 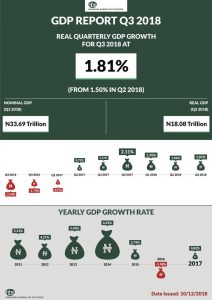 It said the rate of growth of the non-oil sector in the third quarter of the year was higher by 3.08 percentage points when compared to the second quarter 2017 growth rate for the sector.

The NBS report explained that growth in the non-oil sector in the third quarter was mainly driven by information and communication. It gave other drivers of growth for the sector as agriculture, manufacturing, trade, transportation and storage and professional, scientific and technical services.

In real terms, the report said the non-oil sector contributed 90.62% to the nation’s GDP, higher than the 90.16 per cent recorded in the third quarter of 2017.

The 90.62% contribution of the non-oil sector to economic output was however; lower than the second quarter 2018 figure of 91.45%

In terms of contribution, the NBS report stated that in the third quarter of 2018, agriculture contributed 25.52% to nominal GDP.

For the manufacturing sector, the NBS report stated that nominal GDP growth rate in the third quarter of 2018 was 32.73% year-on-year.

This, according to the report, is 13.21 percentage points higher than the preceding second quarter figure of 19.52%.

For the trade sector, the NBS report explained that in the third quarter of 2018, the nominal year- on-year growth rate of the sector stood at 3.78% 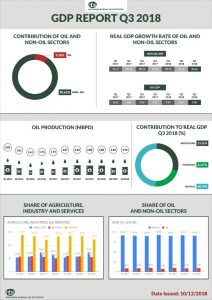 The report put trade’s contribution to nominal GDP in the third quarter at 16.45%.

The report put the real growth rats of the oil sector at –2.91 per cent year-on-year in the third quarter.

It added that the oil sector contributed 9.38% to total real GDP in the third quarter.

Some finance and economic experts who spoke on the performance of the economy called on the Federal Government to sustain the growth momentum by vigorously implementing the capital component of the 2018 budget.

Analyzing the report and projecting into 2019 CNBC invited Bismarck Rewane, CEO of Financial Derivatives and Andrew Nevin, Partner and Chief Economist at PWC. Watch the video above.

In the interview, Bismark stated that,

“But more importantly in the report is productivity. Labour productivity is -0.4%, which means that the modest GDP growth is coming as a result of natural wealth rather than produced wealth – so we got to deal with that.

“Agriculture expanded a little but so far below what is 5 year trend is inspite of the fact that yields are improving. There are constraints that are involved. There is a need for investment, investment and investment, An example is cement manufacturing went up by a 8%, no surprise, Dangote is committing significant resources.

Therefore where there is investment there’s also the multiplier effect and employment impact.” 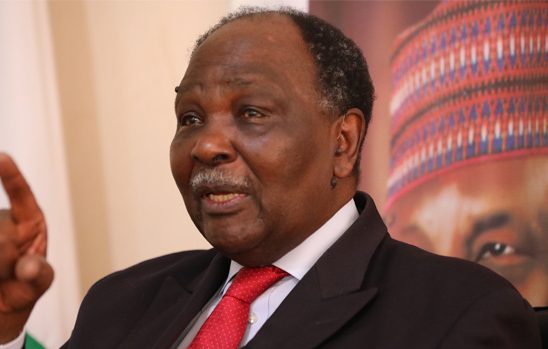