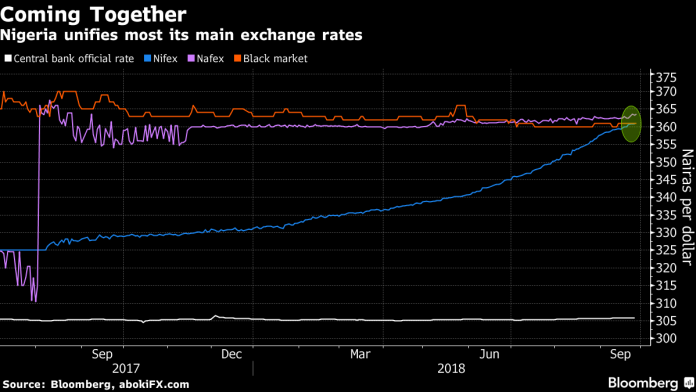 Investors and the International Monetary Fund have long called on Nigeria to merge its multiple exchange rates. It’s starting to look like that’s happening.

The central bank has weakened the “Nifex” rate at which it sells dollars to most local companies by about 10 percent since August last year, bringing it closer to the “Nafex” rate used by foreign bond and stock investors. Nafex and Nifex are also converging toward the naira’s black-market value.

“This a first step toward a more unified exchange rate,” said Samir Gadio, an Africa analyst at Standard Chartered Plc in London.

But it’s just a start. The central bank has kept its official rate for the naira at roughly 305 against the dollar — almost 20 percent stronger than Nafex — for more than two years. It uses this to supply cheap foreign exchange to select companies including fuel importers, as well as government departments.

Analysts including Citigroup Inc. and Renaissance Capital have said the system is opaque and deters foreign investment. They’d prefer a single rate and a freer-floating currency.

While that probably won’t happen for the “foreseeable future,” foreign investors are at least satisfied that the weakening of the naira’s other rates has reduced a shortage of dollars that Nigeria suffered after the 2014 crash in crude prices, according to Gadio.

“At the end of the day, offshore investors will focus more on their ability to repatriate FX proceeds,” he said. “On this point, the track record this year looks good, since the central bank provided FX liquidity to those foreign investors who decided to take profit.”

That’s one reason, along with yields around 15 percent, why Nigeria’s local bonds have outperformed this year. They’ve returned 3.9 percent in dollar terms, the most after Mexico in the Bloomberg Barclays EM Local Currency Government Universal Index, which includes 25 countries. 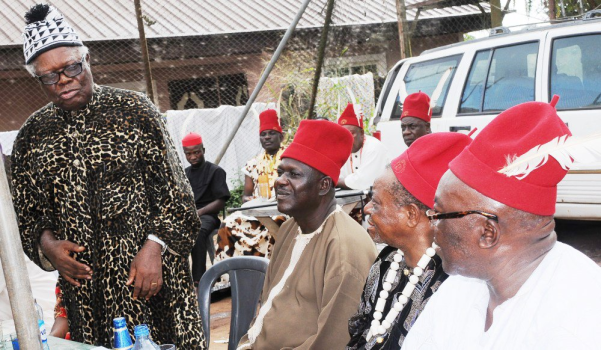 Igbos Are The Children of the Biblical David; No Progress In Nigeria Without Them – Ohanaeze